Titles: None at the moment, though she will eventually inherit the title of Lady once her father passes away.

Coven/Clan Belonged to: Born into the Davikov. An ancient Russian organisation that deals primarily in the trafficking of human's, narcotics and weaponry. On a political level they deal in stock markets, property and money (They have been known to use violence as a means of obtaining all of these things and have even infiltrated their way into some European, Mortal governments.)

Current Residence: Davikov Palace. She has a rather large room there, but also privately owns a small bit of land in both Isadora, Spain and Alabaster, England

Lives With: Her coven.

Occupation: Alanya is the current heir to the Davikov coven, which means she spends a lot of her time preparing for the role. She considers that to be more of an unofficial job and whatever ACTUAL work the coven gives her to be her real job. Most of her work has to do with subterfuge or espionage, which is something she actually enjoys doing.

Nickname(s): None officially, though those around the castle often refer to her with some unpleasant titles... 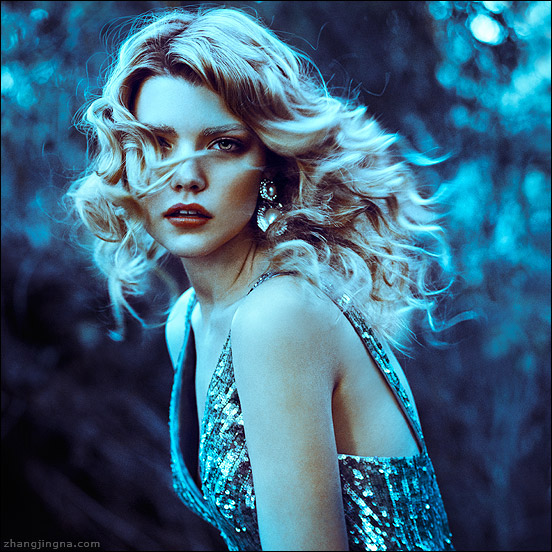 General Description/Facial Features: Not traditional feminine features. Alanya has a long, slim, oval shaped face. Her appearance can be considered icy and sharp the way her brows are full and curved and how her chin is very narrow. While she is good looking, the type of look that she is able to pull off is one that only a select group of people actually find to be attractive. She doesn't mind this though and thinks it makes her more unique.

Height & Body Type: 5' 9'', very tall for a female and she tends to wear high heels that boost her height up to nearly 5' 11''. She has a pear shaped figure with hips that are a little full, but is otherwise very slender and almost dancer-like.

Eyes: Hazel, but they appear more brown than yellowy-green. When she is thirsting her eyes appear a color similar to amber and, in the dark, almost seem to glow.

Hair Color & Style: Very light blonde, but not so blonde that it looks bleached or white. She keeps it cut to a medium length, about two inches past her shoulders. Her hair is naturally very straight, but she likes doing it so that it appears wavy or curled. Occasionally, she will put caramel colored low-lights in her hair, but usually does so in the winter or around the time of special occasions.

Skin Tone: Light olive toned. Would very easily tan if she lived in a place with more sun.

Scars: Very few, which is surprising due to the amount of physical combat she involves herself in.

Type of Dresser: Alanya lives by the idea that a woman should ALWAYS look her best and so, she likes to dress in clothes of high fashion that not only make her stand out, but make her better looking than she is naturally. She prefers winter colors, even in the summer, that go well with her icy features. Alanya also likes to accessorize, sometimes overly so. She's a big fan of anything glitzy or shiny, so she dresses up a lot of her outfits with jewelry and likes to put barrettes in her hair. Alanya ALWAYS wears high heels though, usually a pair of black, 3 inch pumps, because she feels that tall is beautiful and the taller she can be, the better.

Tattoos/Piercings: Two piercings on each earlobe and 3 piercings in her right ear's cartridge.

Other (Wings, ears, etc): Fangs, just like every other vampire.

Mental State: Obsessive Compulsive Disorder.
Alanya HAS to stick to a specific routine every day. If she doesn't, she grows very anxious to the point where it can be bothersome to other people. In relation to the routine, she also has a habit of counting things in intervals of two, making sure things are symmetrical, or orderly in their appearances. Anyone who hasn't witnessed her causing a fuss over something out of order might write her off as being a very organized person.

Activities/Hobbies/Pastimes: Making lists, reorganizing her room, reorganizing the many bookshelves in the castle, making jewelry.

Self-Image: Alanya has been known to come off as very arrogant to many people. She finds that most people pre-judge her before even getting the chance to know her and must maintain and flawless social prescense. When she feels that flawlessness is threatened, she tends to become rather nasty in order to make herself appear better than the other person. Because of this, she's never gotten along very well with other girls.

Weakness: Her insecurities, her obsessions.

Special Abilities/Powers: Vampiric telepathy and enhanced senses. She is also able to conceal her scent with a good amount of concentration.

Overall Personality: Alanya is very oriented toward perfection, so that is naturally what she strives for. She aspires to be the best in everything, whether it be a social challenge or something as simple as having the nicest hair. She can come off as very uptight and strict to people she first meets. Alanya lets go in BlueAsh's club scene, where she can be found almost every night. If there is one thing Alanya really loves, its partying. Late nights out that lead to head-ache mornings in are what she claims makes life worth living. She has an obsessiveness about her though, which brings her right back from her out-of-control state. She also isn't very good at "playing nicely" with other girls due to her massive superiority complex. In short, Alanya is a bitch, but she's also very determined and knows how to get a job done. She has an incredibly abstract sense of creativity which has proved very useful to the coven on more than one occasion.

Worst Personality Trait: Inability to sympathize with others, or put herself in anyone else's shoes.

Sexuality: Bisexual, but favors men. She's never actually perused anything with the opposite sex, but does find herself (much to her dislike) attracted to other women.

Thoughts on love & Relationships: Still young for a vampire, Alanya sees no rush to become seriously involved in any sort of relationship. She knows she wants to be married some day, but wants to take her time to get to that stage. When she finds someone she is attracted to, she can become obsessive over that person. When she really and truly wants someone, she will do absolutely ANYTHING to get them all to herself.

Needless to say, this has caused quite a few messes...

Relationship History: Countless casual flings. Alanya's most known relationship is the one that went on between her and the coven's secondary leader, Roman Black. In the beginning of their relationship, Alanya found herself infatuated with Roman because he was someone different from the vampires she was surrounded with in her coven every day. She didn't learn that Roman was actually using her to get a more powerful position in the coven until it was too late and found out she was pregnant with his child. Sadly, Alanya lost the child and developed an almost hate for Roman -- she tried to kill him several times, but never actually succeeded.

Now Alanya still has feelings for Roman, which she dislikes, but also knows her father looks very highly on Roman. In a desperate attempt to reserve her spot as the coven's rightful next leader, she is determined to have Roman all to herself in order to really impress her father.

General Likes: Partying. Any kind of alcohol. Glitter. Anything shiny. Boys. Jewelry. High fashion. Anything that can be considered luxurious. Her coven. Knowing she's impressed someone. Bright lights and lots of sound. Modern, pop music. Cars. Candy. Blood bars. Winter weather. Getting to run entire missions for the coven by herself. Watching other people fail. Physical combat. Dancing.

General Dislikes: Uncomfortable shoes. The color yellow. Birds. Cheap jewelry or clothes. People who don't care about their appearances or what people think about them in general. Having to spend a lot of time indoors. Small, cramped spaces. Classical music. Bugs. Plaid anything. Hot weather. Humidity.

Mother's role in upbringing: Alanya only spent a small amount of time with her mother because Evdokiya was killed in a raid when she was 9. With the time she did spend with her mother, Alanya often found she couldn't relate to Evdokiya, who was more interested in femininity, while Alanya was excited with knowing she was heir to such a powerful coven. Once her mother passed, Alanya wasn't too effected by it and spent very little time grieving over her.

Father's role in upbringing: Ever since she was a little girl, Alanya has looked up to her father. She can see absolutely no wrong in him. Even though she is what is considered "grown up", Alanya still aspires to be exactly like her father. However, as Alanya has gotten older, their relationship has become one of distance and many misunderstandings. While Kostya now has some distaste for his daughter due to her numerous slip-ups, Alanya maintains a hope that she will one day make him proud. She is determined to do so and to prove that, even as a woman, she has what it takes to rule in a place so usually male dominated.

Relationships with Siblings: Officially an only child, though she does have two younger half siblings from another marriage her father was in shortly after her mother died. When her step-mother (Cordiva) was found having an affair with one of the Castle's guards, she was killed and her two daughters (Veronika and Irina) were told to live elsewhere. They have tried to make contact with Alanya before, but she refuses to have anything to do with them.

Education: Growing up in the castle, Alanya had a private tutor for every subject, as well as personal trainers for her physical conditioning. She did leave Russia for 5 years from the time she was 20-25 to study at a university in England. She obtained two degrees, both masters in history and anthropology.

Accent: Very thick Russian, to the point where her English can sometimes come off as sounding muddled.


History: (Please be as detailed as possible here)


Languages Spoken: Russian and English. She knows basic phrases and can understand most written French and Spanish.

Religion: Eastern Orthodox. Alanya actually DOES practice her religion unlike most of her species. She was raised to remain faithful.