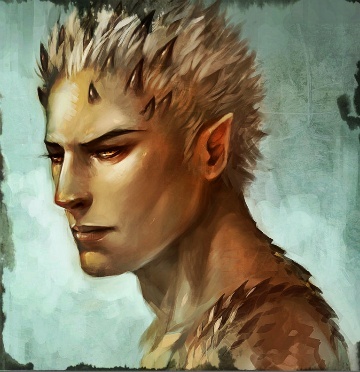 Flesh-Eater:
Erebos was created for a purpose and one purpose alone - To collect the Souls of Mortals
Through the consumption of mortal flesh, Erebos drains the life force and thus the Soul of his victim.
These mortal souls are delivered to his father Ba'al though for what purpose Erebos does not know.
He is merely a collector.

Coven Belonged to:
Davikov Coven- A member of the Covens Armed Forces
The Black Winter- Member (Hunting and assassination Division)

~ Asher is a solider in the Armed Forces of the mighty Davikov Coven, of BlueAsh, Russia.
One of the worlds most ancient Covens founded my Kostya Davikov, the son of the first Russian Pure-blood.
It was he who formed one of the first pure-blood (Sanguine) families, through interbreeding with his Romanian Relatives.

~ Ash, is also a member of the Davikov's more elite clan...
Back in the times when Vamperic hunting clans swept through the rural villages of Europe, the Clan of the Davikov Coven were infamous for leaving behind their signature; Each village that fell as their victim, was left drained of all human life, the only remnants left was the pile of drained, burning bodies. The ashes were said to fall from the sky like Black snow, thus came the metaphorical name 'Black Winter'.

Residence:
Blue Ash - A small apartment within the walls of the Village. Close to the Village Square.
A quaint place, where Asher feels most at home - a place to relax and wind down after a hard say of work or training.

Lives with:
Asher lives with with another demon - A succubus called Victoria.

Relationship Status:
Single
(Though Asher will admit he has an odd relationship with a 'friend' - Victoria)

Relationship History:
Asher has had many long term relationships due to his age though non of them lasted as they aged and died while he remained youthful, and many short lusty encounters that have also ended 'badly' on their part, as these women were merely a meal to Ash.
Victoria is everything from his house maid to his lover though they are both satisfied that their relationship it 'no -stings - attached'

Occupation:
At this current time Asher is a member of the Armed Forces of the Davikov Coven.
Though due to his position in the Black Winter he is also involved in the more political side of the organisation
- An ancient Russian organisation that deals primarily in the trafficking of human's, narcotics and weaponry. On a political level they deal in stock markets, property and money (They have been known to use violence as a means of obtaining all of these things and have even infiltrated their way into some European, Mortal governments.)

Coven Military Training
When Asher 'surfaced' in Blue-Ash he was instructed to find the Davikov, as he was informe dhe would be of use to them; and so he came to be.
He was welcomed into their armed forced and went under sever conditioning and training for almost 5 years. He shone, getting the highest amount of kills in his class, and so he was presented to Kostya and Roman Black.
He was promoted as it were, to not only being a solider he was also to become a key player in the Black Winter.
The trained he went under to pursue this is highly classified and he never speaks of it.

Education:
Asher has little to no education as far as the schooling system goes.
Though he is fluent in most languages, and reads them adequate as well. 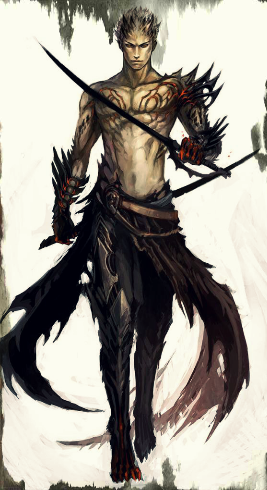 (Asher does not always wear, his armour- gauntlets, shoulder piece and boots, he is often seen in more casual attire,
though always covered by a long hooded cloak)

Height, Build & Weight:
6ft 7 inches.
Athletic
170Ibs.
Asher has a very athletic build, though he is not 'bulky', his form is lean and tall - which makes him very fast on his feet. He was built for speed and stamina, both things he possesses.
He is not concerned with his physical appearance though he is in perfect physical shape due to the amount of exercise he does on a daily basis.

~ On the battle field, he makes deaths quick and efficient, by running past his enemy as such speed they do not realise his presence until he has fled ,and on to his next victim, leaving their throat slit, head decapitated, or jousted through the heart.

Eye Colour:
Usually ~ Amber, with a scale like pattern flecked with black that gathers as a ring about his iris.
Hungry ~ A deep Orange/Red shade, still scale like in texture though the ring thickens about his iris making his eyes seem wider.

Hair Color & Style:
Asher's hair is a very light blonde shade, much like his mothers.
It appears almost white, save for the flecks of gold at the tips.

His 'style', if it can be called a style at all is somewhat messy, as it is only ever cut by Victoria and she is by no means a hair stylist.
Though she does a good enough Job for Asher.

Skin tone:
His skin tone is very dark, due to his place of origin.
It contrasts dramatically against the light shade of hair, though he isn't too noticeable as he often keeps his head covered.
Asher's blood is very dark compared to Mortal blood, and appears almost black once it is drawn to the surface, and even when it runs through his veins it stands out against his skin. For example: the lighter undersides of his wrists and other lighter places.

~ Four Fangs on his upper jaw, Two on his lower (Used for feeding and expressing aggression)

~ Several short horns on either side of his head.
That extend from his forehead and back into his hair line, getting larger as they proceed.

Powers:
Rune Magic's
~ Asher is knowledgeable when it comes to these magic's and has always taken a deep interest in any sort of magic, though he chose these as his favourite.
He was taught them, when he was very young as his mother also used them whilst surfaced and saw that seeing as her son was destined to also surface one day, she thought they could help him as well. She was right, and Asher has since used Runes to escape many awkward and sometimes dangerous situations. Though he does not always use them on himself, his favourite trick it getting something to tell him their secrets by inscription a truth rune upon their skin. He also has a habit of 'disappearing', with the use of Sight Rune - removing sight, and making himself invisible.

Pyro-Kinesis (Control & Summoning of Over Hellfire)
As a his mother gave him her knowledge about Runes, Asher also had a 'gift' bestowed on him by his father. - The Ability to summon and control hell- fire. Hell fire being stronger than earthen flames, one flame of Hell-fire can light a village in seconds, as it spreads like a rapid plague.
Asher see's no use in this ability other than to light the odd candle, as he likes to remain in the background - The use of Hell-fire results in a massive display of flame and light and often draws attention to its caster.

Equipped with:
On belt
Two swords (As seen above) //One doubled-edged Blade // One poker-like, cylindrical dagger
(He often uses his weapons when in battle or when he is on a hunt -
The poker is his weapon of choice when it comes to hunting mortals)

Popular or Loner:
Loner -
Asher pays no mind to those who surround him, unless they take the time to talk to him - and even then he is a very quite and solitary man.
He has friends, though even they admit he is somewhat of a hermit or recluse.

When at 'home' in Blue-Ash Victoria will often pester him to spend time with him, though rather than tell her he would rather not, he will simply sit in silence - ignoring her.
Asher talks when he is require to - to ask or say thanks for something, negotiating etc, though never to be social or introduce himself.
Though he has an alias to disguise his real name, he would still rather not get what he calls 'too personal' with people.
Ash, is merely comfortable in his own company and see's no reason for it to be any other way as he was always a very lonely child, and thus he is a lonely man.

Self-Image:
Asher doesn't care about his appearance, or pride. He believes the world is fair and people get what they deserve and that everyone is capable of Evil - then he will be there to take their souls.

As far as his sexuality is concerned, Asher is confident towards women though unfortunately he finds that many of his 'Rendezvous' are merely of a casual nature and never lead to anything serious.
Some men have found him threatening due to his independence and self assuredness. His impatience’s with small talk and quick sarcasm is often misread as arrogance. Though women find his charm and whit undeniably alluring.

Mental Stability:
Sane and Lucid.
Sure of himself and his purpose.

Best Personality Trait:
Asher contemplates everything before he acts, making his actions meaningful and carefully planned
His perfectionism towards every aspect of his life.

Worst Personality Trait:
Some might say his solitude and his attitude towards it.
However he see's his worst trait as his urge to hunt the innocent.

Role in upbringing & relationship:
Erebos was brought up solely by his Mother. As is the way in Hell, though he never really knew her as a person as he 'surfaced' as soon as he hit his demonic maturity and during his 'childhood' she would often leave hell to feed, and collect Souls for Ba'al as he later went on to do so.

Biological Father:
One of the Seven Prince's of Hell - Ba'al - (Gluttony)
Commander of the Infernal Armies of Hell

Role in upbringing & relationship:
Asher never knew his father or met him, and he was somewhat of a legend to him as a boy, though his mother told him he was the son of Ba'al and to be proud of that fact.

Family Finance:
Money is not a worry in hell, and is often fabricated for use while 'surfaced' on earth.
'Money is no object'