Of Bone, and Smoke- A memoir of Cosian.

Of Bone, and Smoke- A memoir of Cosian.

Entry #1:
So it turns out Ariane forgave me for my outburst outside the tavern.. Apparently I'm a "Pet", cute. I also grasped a new idea today.. "love". People want to be loved, more then they do love. I kissed a girl named Rose, just to see what it would feel like. It was nice.. I just won't be doing it again any time soon.. not with her anyway. I saw Ariane feed for the first time today, what seemed to be a run in with some sort of secret-star-crossed-lovers, turned out to be Ariane sucking the life out of him, through what looked like a kiss. I asked her about using other holes in the body, but she just seemed disgusted at the thought of ears. I met her uncle today to, hallarious man- but there was also another man.. Psonic, just like her. She show'd interest, and through that grin of his, I think it's mutual.. but what is this I'm feeling over that? Jealousy..? Insecurity..? But why? do I honestly feel attracted to Ms. Ariane Rosetta-Black? It's probably just some reaction with this.. drink.. They called it Ale, rather bubbly stuff. Could be messing with me. That's enough for an entry, methinks. So much has changed over four days of my life.. let's see if this gets any stranger.

I killed Tus today, I killed my mother. Balance is key in this world, the simplest turn of balance- can end it all. I have to ask myself, why do I care? My life is basically meaningless. I have nothing to live for- besides her. I don't know what this feeling is, but I care for her. I breath for her- I did this all because of her, to protect her. And what does she say. "You barely know me, Cosain. You've just scratched the surface. " She was so smug, so calm and composed.. I hated it. I hate the fact that she could just mask her emotions like that- something I could never do. We stopped fighting, for a long time. I broke the silence, which what has to be the highlight of my life so far. Happiness. I kissed this girl, and I felt happy. A demon, happy. I'm no demon, I'm Cosain. A demon wouldn't sit down and write about what he did, or what was on his mind. I plan on ditching this armor- for a suit tomorrow. Maybe I'll be able to fit in.

I'm dying. I can feel it. Tus knew the created, will always rebel against their created. So my natural lifespan is only about nine days.. Nine days- compared to that of a vampire- who cannot die of old age, like me. I lay here, on Ariane's couch, withering away. I think I only have a few hours left.. I hope I get to say goodbye.. Three entries doesn't feel fair for a memoir- but I suppose it's all I can do..

I live. I've been encased in stone at the bottom of the lake for the past three weeks. But what that really death? Hardly seemed like it. It Felt more of.. change. I felt hunger for the first time today, I felt bad for feeding, not the prettiest sight. I must eat, though, I suppose. Yet.. It was thrilling. The rust of the hunt, the spray of blood into your mouth as you make the first bite into that delicate skin.. I won't be feeding on a human again, any time soon. I'll stick to deer, and another things. The Angelic gods had revived me- In return for killing Tus, I suppose. The least I can do is refrain from killing sentient life. These weeks haven't changed Ariane whatsoever, besides for the amount of stress from the thankfully averted war, it seems she hasn't been feeding so much. I've missed her- a lot. I've missed this town a lot. Alablaster- it's home now, I suppose. You wouldn't expect a demon to be protecting a town- but I must take into account I am no demon. I am bone bred- a higher form of kin. That's all for now- I must go hunt.. again.

~*~
The page between Entry four and five are filled with pentagrams, and other demonic symbols, written by Jealousy, the Demon.
~*~

Carrick and Ariane are together.. I feel depression for the first time.

Ariane dislikes me. I no longer want to be a "pet" of her's. If she thinks I'm so unpleasant- she won't have to worry about that any more. I do not hate her- yet it would be an understatement to say I dislike her. I feel negatively towards Ariane Rosetta-Black. She can go live her life with Carrick. Carrick.. I don't know how I feel about him anymore. I have a feeling I'm going to have to find new friends- I fear being alone in this world. Jack- he calls himself, a young boy, claims to be eleven- I like him. Possibly he can mentor me, to be "invisible" like himself. The boy can just blend into a crowd- or a backround within seconds.. a good skill. He's also very polite- and acts well. This I'll also try to lean from him. 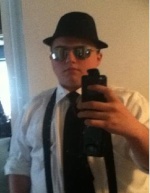 Re: Of Bone, and Smoke- A memoir of Cosian.

Re: Of Bone, and Smoke- A memoir of Cosian.